Trump Is Trying to Bend Reality to His Will

Trump Is Trying to Bend Reality to His Will

Can President Trump's appeal to ethnonationalism succeed in the 2020 elections? Two research studies by CES faculty and former affiliates are cited in this opinion piece by Thomas Edsall, The New York Times.

Disruption, disorder and disease are gripping the United States as the 2020 election draws near, leading to an unusual degree of unpredictability about our political future. Despite current state and national polling that favors Democrats, we still can’t say for sure whether the nation will tip left or right.

Driving this destabilization, according their new paper, “Beyond Populism,” is the feeling millions of voters continue to have of being left behind, of “‘losing out’ in a world marked by, on the one hand, traditional gender-and race-based hierarchies, which limits the mobility of minority groups, and, on the other hand, globalized competition, which puts a premium on human capital” — especially on “learning capacity,” roughly measured by the presence or absence of a college degree.

The crucial role of human capital is illustrated in a 2011 study published in the American Economic Review, “Sources of Lifetime Inequality,” by Mark Huggett, Gustavo Ventura and Amir Yaron, economists at Georgetown, Arizona State and the University of Pennsylvania.

The authors found that human capital, including learning skills, accounted for “61.2, 62.4, and 66.0 percent of the variation in lifetime earnings, lifetime wealth, and lifetime utility” — a measure of life satisfaction.

"Support for radical parties is ... specially high among people who feel they have been socially marginalized."

Petersen and his colleagues found that those experiencing rising levels of frustration are motivated to turn to the relative extremes of the political spectrum reflecting “discontent with one’s own personal standing.”

This phenomenon, they continue, is concentrated

among individuals for whom prestige-based pathways to status are, at least in their own perception, unlikely to be successful. Despite their political differences, this perception may be the psychological commonality of, on the one hand, race- or gender-based grievance movements and, on the other hand, white lower-middle class right-wing voters.

The traditional avenue to standing in society — “tangible benefits including income and job access” and “intangible benefits including cultural hegemony, prestige, authority and social space” — requires the “human capital” I mentioned above, which what Petersen described in an email as “the stock of skills and competencies that allow people to produce economic value” that “involve the cultivation of talents and skills that are valuable for others and, hence, based on a reciprocal relationship wherein status is granted in exchange for service.”

When inequality increases, the issue of status becomes sharper, and “people will simultaneously feel that (a) it is important to get status and (b) that it is very difficult to do so.” In such a situation, at the extremes, “some people will feel that the use of fear and intimidation is an attractive shortcut to getting recognition,” Petersen wrote by email.

“It would be wrong to exclusively think of this as a right-wing phenomenon. People on the extremes of both the left-wing and the right-wing are likely to be high in dominance motivations,” Petersen continued, adding that

The difficulty of rising up the economic ladder is reflected in the decline in mobility in the United States. Research by Raj Chetty and colleagues has demonstrated that the percentage of children who make more than their parents has fallen from just over 90 percent for those born in 1940 to 50 percent for those born in 1984. The declines have been sharpest in the South and Midwest, as shown in the accompanying map — in many of the areas that provided key support to Donald Trump in 2016.

The frustration over the lack of mobility is particularly acute for those without college degrees. 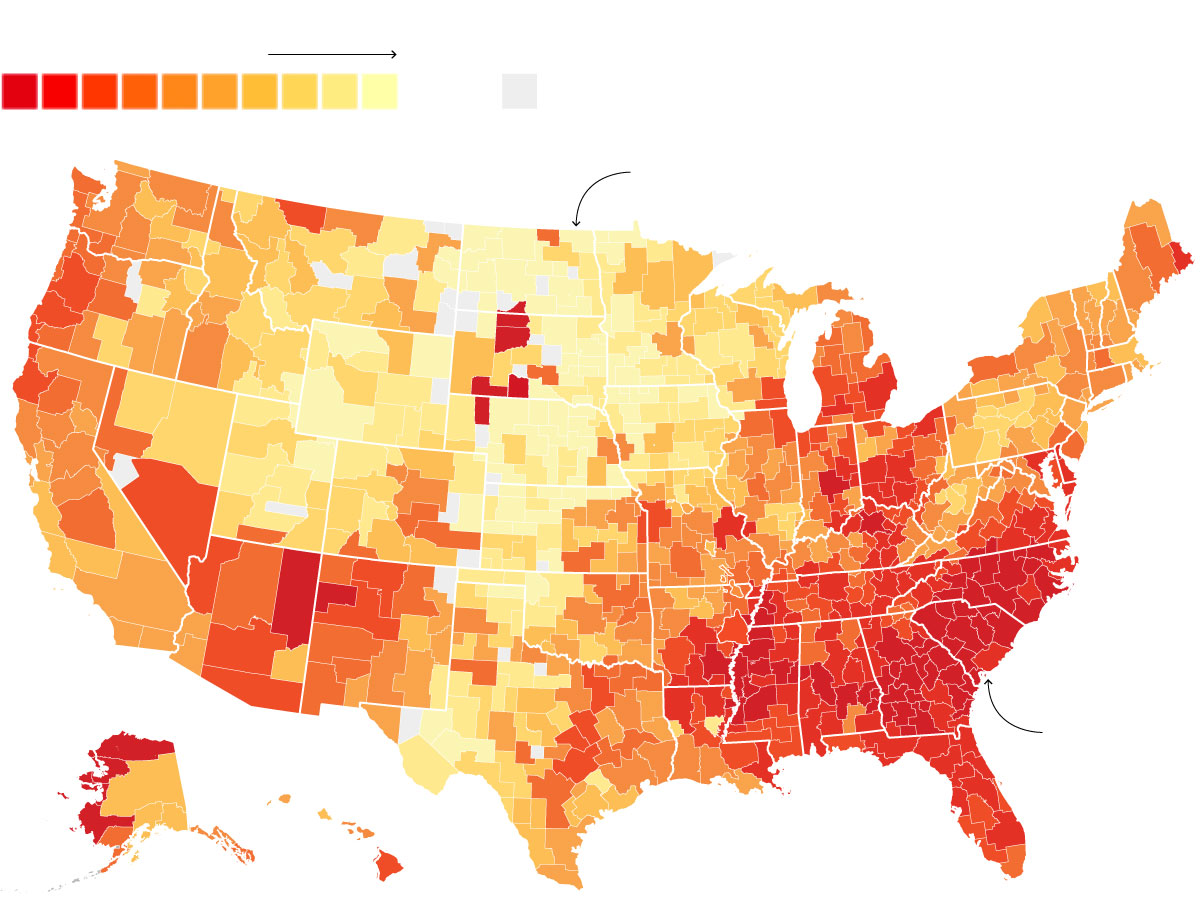 In a 2019 paper, “The College Wealth Divide: Education and Inequality in America, 1956-2016,” three German economists, Alina Bartscher, Moritz Kuhn and Moritz Schularick, all of the University of Bonn, determined that in the United States since the since the 1970s “the real income of non-college households stagnated, while the real income of college households has risen by around 50 percent.” The income data is, however, dwarfed by the findings on wealth:

The case made by Petersen and his collaborators that more Americans are becoming marginalized gets strong support from Noam Gidron and Peter A. Hall, political scientists at Hebrew University and Harvard, in their paper, “Populism as a Problem of Social Integration.” They write:

Our key contention is that populist politics reflects problems of social integration. That is to say, support for radical parties is likely to be especially high among people who feel they have been socially marginalized, i.e. deprived of the roles and respect normally accorded members of mainstream society. From this perspective, the sources of social marginalization may lie in economic or cultural developments and in how they combine.

Large segments of the population, they continue, have been

“left behind” — relegated to vulnerable economic and social positions, increasingly alienated from the values prominent in elite discourse, and sensing that they are no longer recognized as valued members of society.

As a result, the authors argue, “subjective social status” — that is, “people’s own beliefs about where they stand relative to others within this status hierarchy” — has become a crucial factor in shaping political commitments:

There is a consistent association between levels of subjective social status and voting for parties of the populist right and radical left. The more socially marginalized people feel, the more likely they are to gravitate toward the fringes of the political spectrum.

Voters who feel a loss of standing, who experience themselves as marginalized, often turn left or right — whites in this category may turn to the right; African-American, Latino and other minority voters can find that the left has more to offer.

“Changes in cultural frameworks,” the authors write, are

leading people who hold traditional social attitudes to feel socially marginalized as a result of incongruence between their values and the discourse of mainstream elites. The growing prominence of cultural frameworks promoting gender equality, multiculturalism, secular values and LGBTQ rights is the most notable of such changes.

Steps toward inclusion are double-sided: they can lead people who hold more traditional values to feel marginalized vis-à-vis the main-currents of society.

Gidron and Hall observe that extensive research has shown

that support for the far right is often strongest, not among people suffering the greatest economic distress, but among people who are somewhat better-off if still facing economic difficulties.

This constituency of voters “a few rungs up the socioeconomic ladder” is, in turn,

susceptible to “last place aversion,” namely, a fear of falling even farther down it; and they often erect social boundaries separating ‘respectable’ people like themselves from others seen as lower down on that social ladder. Thus, the anti-immigrant and anti-ethnic appeals of populist right parties may be especially attractive to them, because they emphasize such boundaries.

Those drawn to the progressive left, in Gidron and Hall’s view, are “voters with status concerns but universalistic values that incline them against ethnonationalist appeals.” These voters “are more often found among sociocultural professionals and people with higher levels of education” and, because they have universalistic values, they are likely to support “left parties” that “promise redistribution.”

Another major difference between voters who back left or right parties is the kind of work they do. According to Gidron and Hall,

There are stark differences in the occupational bases of support for the radical left and right. Left parties seem to have particular appeal for people in professional occupations who may nonetheless feel that they are not receiving the social respect they deserve. By contrast, radical right parties appeal most strongly to people in low-status occupations: manual workers and low-skill service employees.

What about socially marginalized voters who are conflicted —

How the Coronavirus Could Create a New Working Class

CES Resident Faculty, Peter Hall and Bart Bonikowski, provide insights into the creation of a new working class and how the outbreak can lead to a rise in populism.